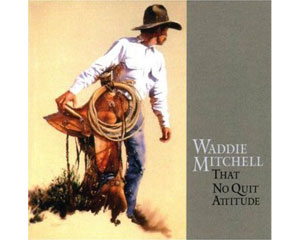 The poem "No Quit Attitude" was originally commissioned for the 2002 Olympic Winter Games in Salt Lake City, Utah. This album is full of clever accounts, both insightful and humorous, of the life of a cowboy.

Waddie Mitchell is called the "best living cowboy poet" by True West magazine for good reason. He has won fans and hearts all over with his down to earth, beautiful yet realistic interpretations of daily life as a cowboy. Among many awards and accolades he has received, Waddie was named one of the top 20 Nevada artists, authors, and entertainers of the 20th century.